How Can Holiday Stress Be Reduced?
5 Great Tips That Work

It’s Jobee from Nutrition Breakthroughs. If you or someone you care about experiences holiday stress or insomnia during the holiday times, then these healthy tips will come in handy.

1. If you drink coffee, try to replace some of it with herbal teas such as chamomile, lemon balm or passionflower.  These are all proven to calm and relax and help with better sleep.

2. Do some regular, gentle exercise that you enjoy.  Some ideas would be walking, dancing, stretching or cycling.

3. Spend some time outdoors and if it’s very cold, bundle up!  Especially if you spend a lot of time indoors in front of a computer screen, go outside and look at the trees, houses, clouds, buildings and other large objects. This helps the body and mind unwind and get some rest.

4. Turn off the TV, computer or cell phone at least an hour before bedtime.  The lighted screens of these electronics have been found to reduce melatonin levels in the body, which is a natural hormone that regulates the sleep and wake cycles.

5. Enjoy the celebration of thanks and goodwill and if any difference of opinion starts to develop with a friend or family member, just move on to the next topic and direct their attention to something you know they like or admire.

Here’s to your good  health, good sleep, and the very best of the season! 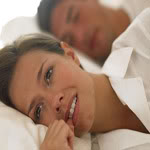