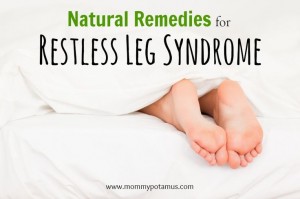 Restless leg syndrome (RLS) is a form of insomnia characterized by an overwhelming urge to move the legs when they are at rest, especially during sleep. Recent research studies have found that people with restless leg syndrome are deficient in the mineral magnesium.

Those who have restless leg syndrome experience unpleasant sensations in the legs described as creeping, crawling, tingling, pulling or painful. People with RLS often experience chronic insomnia and sleeplessness due to the strong urge to walk or do other activities to relieve the sensations in their legs at night.

In one study from the Romanian Journal of Neurology, researchers conducted tests in people with RLS. They found agitated sleep and frequent periods of night time awakenings, with a decrease of the deeper “rapid eye movement” (REM) sleep – also found in other forms of insomnia caused by magnesium deficiency.

Sleep Minerals II is a drug-free, calcium and magnesium based sleep aid that is one of the more effective restless leg syndrome remedies. The minerals are uniquely formulated in a softgel with natural oils, making them more highly absorbable than tablets or capsules. The formula soothes insomnia and helps everyone from older adults, to teenagers, to women with menopause symptoms, and even those with restless leg syndrome — to get a good night’s sleep.

Kimberly B. of Troy Michigan says: “I have been taking Sleep Minerals II for about a month now. I have tried everything out there and this supplement is amazing. I have suffered with insomnia for two and a half years and have had restless leg syndrome my entire life. This is the first relief I’ve ever had…it’s gone for a month now.”

J.M. of Florida says: “My restless legs were so bad that after 5:00 p.m. I could hardly sit down for two minutes without my legs moving. After taking the Sleep Minerals II for a while, my restless leg syndrome is greatly diminished and I’ve noticed I’m getting more and more sleep.”

Anne and Bob B. of El Dorado Hills, California says: “We find the Sleep Minerals very helpful for my husband’s restless leg syndrome. He does not do well on many medications and the drug the doctor prescribed for this was full of bad side effects. Out of pure desperation, I researched the internet and came up with an article about Sleep Minerals II and decided to try them. They have been wonderful. Bob continues to sleep much better and with very little, if any, movement in his legs.”

Valerie. H. in Santa Clarita, CA. says: “I had such bad menopause insomnia that I couldn’t fall asleep.  It took me hours to get to sleep even though I was very tired.  I also had creepy crawly feelings in my legs at night.  I got the Sleep Minerals II and started taking it.  I fall asleep now within 20 minutes and no more restless legs.”

Jill C. of Ellensburg, Washington says: “My husband has been struggling with restless leg syndrome his whole life. He couldn’t sleep more than three to five hours unless taking an addictive prescribed narcotic, which he became tolerant to and the insomnia came back with no answers. Now he’s been taking Sleep Minerals II for a week and every night has had a great night’s sleep.  We are thrilled.”

This news is shared by Nutrition Breakthroughs, a provider of natural health articles and effective remedies since 2001. Its mission is to provide nutritional supplements that get results and help people to avoid drugs and their side effects.  Since 2009, their natural sleep aid Sleep Minerals II has been keeping that promise – by soothing even the worst insomnia with absorbable forms of calcium and magnesium.

For more info on Sleep Minerals II, visit this page.