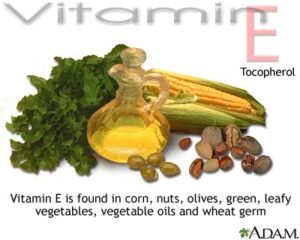 A high percentage of menopausal and premenopausal women around the world are regularly experiencing hot flashes and night sweats.  Due to the side effects of hormone drugs, many are reaching out to seek natural remedies for relief.

Vitamin E is famous for the health benefits it provides to glands, organs and the heart, however it may not be generally known that vitamin E is a proven remedy for menopausal hot flashes and night sweats.

A hot flash, also called a hot flush, is a sudden unexpected feeling of warmth and often a breakout of sweat in the upper half of the body. These flashes occur with up to 80% of women around the time of menopause, and men can also have them due to a lessening of testosterone at middle age.  A night sweat is a “hot flash” that occurs in the night, often while one is sleeping, and can cause frequent awakenings.

Vitamin E was shown in a recent study from Gynecologic and Obstetric Investigation to be a natural alternative to estrogen therapy and an effective remedy for hot flashes.  The researchers found there were significant statistical differences in the hot flash severity score after women took a 400 IU vitamin E (softgel cap) daily for 4 weeks.  They concluded that based on the trial, hot flash vitamin E relief is a recommended treatment.

Adelle Davis, the first nutritionist to base her recommendations on science-based studies, says: “During the menopause the need for vitamin E soars ten to fifty times over that previously required. Hot flashes and night sweats often disappear when 50 to 500 units of vitamin E are taken daily, but they quickly recur should the vitamin be stopped.”

Calcium is directly related to our cycles of sleep.  In one study published in the European Neurology Journal, researchers found that calcium levels in the body are higher during some of the deepest levels of sleep, such as the rapid eye movement (REM) phase.  The study concluded that disturbances in sleep, especially the absence of REM deep sleep or disturbed REM sleep, are related to a calcium deficiency.  Restoration to the normal course of sleep was achieved following the normalization of the blood calcium level.

Regarding the need for calcium need at the time of menopause Davis says: “During the menopause, the lack of the ovarian hormones (estrogen and progesterone) causes severe calcium deficiency symptoms to occur. At these times, high amounts of calcium should be obtained and every step be taken to insure its absorption into the blood. When these precautions are taken and the diet is adequate in other respects, the woman at menopause usually loses her irritability, hot flashes, night sweats, leg cramps, insomnia, and mental depression.”

Calcium works best when it’s balanced with about half as much magnesium in a two to one ratio.  Mildred Seelig, M.D., a leading medical researcher on the benefits of magnesium says: “The Ca/Mg ratio of two to one (twice as much calcium as magnesium) has long been considered physiologic and best for normal functioning. This was confirmed on the basis of long-term metabolic studies in young men and women done by the Research Division of the U.S. Department of Agriculture.”

Estrogen-based hormone drugs may increase the risk of heart disease and stroke.  An increasing number of women are turning to non-pharmaceutical remedies for night sweats and insomnia. Vitamin E and highly absorbable forms of natural minerals are proven, soothing alternatives.

This news is brought to you by Nutrition Breakthroughs, maker of the effective natural insomnia remedy Sleep Minerals II. Anita L. of New Caney, Texas says: “I was having hot flashes every 30 minutes to an hour through the night and was so miserable. After about two weeks of taking the Sleep Minerals, I noticed an incredible difference with my sleep. I have much less interruption from flashes, I’m sleeping much better and I’m a lot more comfortable.”

Richard P. of Parkville, Maryland says: “The Sleep Minerals are making quite a difference. I was regularly waking at around 3:00 a.m. and after a few days use of taking two, my sleep improved quite a lot. I wake once a night to go to the bathroom, but the great thing is, I then fall back asleep and sleep several more hours. This has been a great improvement.”

For more information on Sleep Minerals II visit this page.