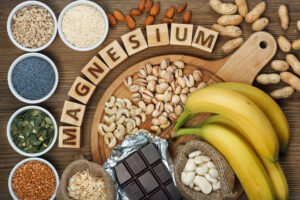 Magnesium is the fourth most abundant mineral element in the human body, following calcium, sodium and potassium. Magnesium enables many biochemical reactions necessary for life. However, much attention has been directed recently towards another role of this element: The movement of (small particles) of calcium and potassium, as well as (other) molecules across nerve cell membranes….

These roles are important for nerve conduction, muscle contraction, blood vessel relaxation and tensing and thus blood pressure, and a normal heart beat. Epidemiological (studies of populations) findings and supplementation trials show that people’s magnesium status is associated with the severity and frequency of migraine headaches, some forms of heart attacks, high blood pressure, sleep disorders and mood disturbances. Carefully controlled human studies at the Grand Forks Human Nutrition Research Center and elsewhere are being done to conclusively show that inadequate magnesium intake can result in these maladies.

For instance, in studies on women past menopause at the Grand Forks Human Nutrition Research Center, we found that a low magnesium diet resulted in heart rhythm changes, which were halted by a diet providing about 300 mg of magnesium daily. In a much more severe form, some of these changes in heart rhythm or beat can result in heart muscle contractions that do not move blood throughout the body and lead to death. So magnesium is definitely needed for a healthy heart.

The same studies also showed that a diet inadequate in magnesium caused changes in brain waves–electrical activity in the brain–when women were at rest. Other researchers have found in both human and animal studies that magnesium deficiency results in sleep disturbances, such as agitated sleep and frequent periods of awakenings. This has been related to changes in electrical activity in the brain. It looks like magnesium is important for a good night sleep.

Dietary surveys show that the diet of many Americans does not consistently provide the DRI for magnesium. Older people are especially prone to consuming a diet inadequate in magnesium. Good sources of magnesium are leafy vegetables, nuts, skim milk and whole grains.

Chronic insomnia is one of the main symptoms of magnesium deficiency. Sleep in magnesium deficiency is usually agitated with frequent nighttime awakenings.  On the other hand, a high magnesium diet has been found to be associated with deeper, less interrupted sleep. This was proven in a study done by James Penland at the Human Nutrition Research Center in North Dakota. The study was titled “Effects of trace element nutrition on sleep patterns in adult women.”

Sleep Minerals II is a natural sleep remedy from Nutrition Breakthroughs that contains highly absorbable forms of calcium and magnesium, the best minerals for sleeplessness and insomnia, as well as for heart health, restless legs syndrome, bone strength and menopause insomnia.  The formula also includes vitamin D and zinc and is delivered in a softgel form with healthy carrier oils, making it more fully absorbable and fastger-acting than tablets or capsules.  The oils help the ingredients to provide a deeper, longer-lasting sleep.

Valerie H. of Santa Clarita, California says: “I had such severe menopause insomnia it took me hours to fall asleep even though I was extremely tired.  My legs also had crawling and tingling feelings at night. I got the Sleep Minerals and after a few days, it started to work really well. I fall asleep now within 20 minutes and no more restless legs.”

The abuse of prescription pain medications is at an all-time high. A recent White House study reported a 400 percent increase in the number of people admitted to treatment centers and emergency rooms for abusing prescription pain drugs. The increase was tracked during the 10-year-period from 1998 to 2008 and it spans every gender, race, education and employment level, and all regions of the country. A government representative from the Substance Abuse program said, “The non-medical use of prescription pain relievers is now the second-most prevalent form of illicit drug use in the Nation.”

A battle has been raging for some time between potent natural remedies and addictive drugs and medicines. This is mostly due to the lack of easily understood knowledge about which natural options have been proven effective. In 400 B.C. the “Father of Medicine” Hippocrates said to his students “Let thy food be thy medicine and thy medicine be thy food”. Mother Nature has provided us with two natural remedies for pain and insomnia that are backed by scientific studies as well as the test of time – calcium and magnesium.

The National Institutes of Health (NIH) fact sheet on magnesium says that the mineral is needed for more than 300 biochemical reactions in the body. It helps maintain normal muscle and nerve function, keeps heart rhythm steady, and supports a healthy immune system. Calcium is needed to form bones and teeth and is also required for blood clotting. It helps lower colon cancer risk, helps control high blood pressure, and acts as an effective insomnia remedy.

Headaches are a common source of pain. Studies have shown that people with migraine headaches have low concentrations of magnesium in their body. The word “cephalalgia” literally means head pain or headache. In a German study of eighty-one migraine patients published in the journal Cephalalgia, 42 percent of the people taking oral magnesium reduced both the duration and intensity of their migraine attacks. They also reduced their reliance on medications to control migraines.

Adelle Davis was one of the first nutritionists to base her recommendations on scientific studies. In her book “Let’s Eat Right to Keep Fit” she says, “Calcium is a pain killer par excellence. One physician tells me that he uses no painkillers but injects calcium into the veins of patients suffering even excruciating pain and that relief occurs almost immediately.”

In a recent study of 497 women, calcium was shown to be an effective pain reliever. The study, published in the American Journal of Obstetrics and Gynecology, was called “Calcium Carbonate and the Premenstrual Syndrome: Effects on Premenstrual and Menstrual Symptoms.” Within two to three months, the women who were supplemented with 1200 mg of calcium daily, were able to reduce their pain symptoms by 54%, while the women not on calcium actually experienced an increase in pain.

In addition to pain relief, Adelle Davis also recommends calcium as an insomnia remedy. She says: “A calcium deficiency often shows itself by insomnia, another form of an inability to relax. The harm done by sleeping tablets, to say nothing of the thousands of dollars spent on them, could largely be avoided if the calcium intake were adequate.”

Regarding the use of nutritional remedies containing calcium and magnesium for relief of pain and remedying insomnia, certain formulas are more effective than others. The combination of minerals included and the presence of cofactors in the product are key. Formulas should contain a 2 to 1 ratio of calcium to magnesium (twice as much calcium as magnesium). The original research on this recommended ratio appeared in 1935 in the Journal of Physiological Reviews and was made on the basis of long-term metabolic studies in men and women.

Sleep Minerals II has had beneficial results with lessening pain and relieving insomnia. Corrine E. of Alberta Canada says: “I have used many types of sleeping pills during the last 20 to 25 years to try to help cope with chronic insomnia from the chronic pain, and none of them have helped me for as long or as consistently as Sleep Minerals II. This sleep remedy has made a big difference for me. I am on my third bottle. I ran out between the first and second and realized just how much it was helping my sleep.“

The war between natural remedies and toxic medications can be won in our very own medicine chests by keeping some powerful forms of calcium and magnesium nearby. For more information on Sleep Minerals II visit https://www.nutritionbreakthroughs.com/sleep-minerals-ii-effective-natural-sleep-aid-for-insomnia-nutrition-breakthroughs/