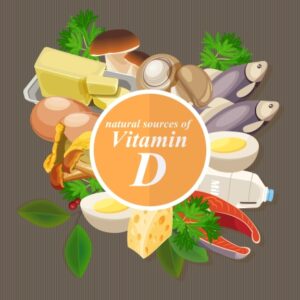 You may be surprised to learn that vitamin D is completely different from most other vitamins.

It is actually a hormone, a steroid hormone that is produced out of cholesterol when your skin is exposed to the sun. (Steroid hormones include estrogen, testosterone and the adrenal gland hormones).

For this reason, vitamin D is often referred to as the “sunshine” vitamin.

However, sun exposure is often inadequate these days, making it necessary for people to get more of it from the diet (or supplements).

This is important, because vitamin D is absolutely essential for optimal health (1).

Unfortunately, only a handful of foods contain significant amounts of this vitamin, and deficiency is extremely common (2).

This article explains everything you need to know about vitamin D.

What is Vitamin D?

Vitamin D is one of the fat-soluble vitamins (A, D, E and K), meaning that it dissolves in fat/oil and can be stored in the body for a long time.

There are actually two main forms found in the diet:

Of the two, D3 (cholecalciferol) is the one we’re interested in, because it is almost twice as effective at increasing blood levels of vitamin D as the D2 form (6).

Bottom Line: Vitamin D is a fat-soluble vitamin that can be stored in the body for long periods of time. There are two main forms, D2 and D3, of which D3 is much more effective.

What Does Vitamin D Do in The Body?

It needs to go through two conversion steps to become “active” (8).

First, it is converted to calcidiol, or 25(OH)D, in the liver. This is the storage form of the vitamin in the body.

Second, it is converted to calcitriol, or 1,25(OH)2D, mostly in the kidneys. This is the active, steroid hormone form of vitamin D.

Calcitriol travels around the body, going into the nuclei of cells. There it interacts with a receptor called the vitamin D receptor, which is found in almost every single cell of the body (10).

When the active form of vitamin D binds to this receptor, it turns genes on or off, leading to changes in the cells (12). This is similar to how most other steroid hormones work.

It is well known that vitamin D affects various cells related to bone health, for example telling the cells in the gut to absorb calcium and phosphorus (14).

But scientists have now found it to be involved in all sorts of other processes, including immune function and protection against cancer (15).

Bottom Line: Vitamin D is turned into calcidiol, the storage form of the vitamin, which is then converted into calcitriol, the active steroid form. Calcitriol binds to the vitamin D receptor inside cells, turning genes on or off.

Sunshine is The Best Way to Get Vitamin D

Vitamin D can be produced out of cholesterol in the skin, when it is exposed to the sun. The ultraviolet B (UVB) rays from the sun provide the energy needed for the reaction to occur (16).

If you live where there is abundant sun year round, then you can probably get all the vitamin D you need by just going outside and sunbathing a few times per week.

Keep in mind that you need to expose a large part of your body. If you’re only exposing your face and hands then you will produce much less vitamin D.

Also, if you stay behind glass or use sunscreen, then you will produce less vitamin D, or none at all.

This makes the advice to use sunscreen to protect against skin cancer highly questionable. It raises your risk of vitamin D deficiency, which may lead to other diseases instead (17).

If you decide to get your vitamin D from the sun, just make sure to never, ever burn.

Sunshine is healthy, but sunburns can cause premature aging of the skin and raise your risk of skin cancer (18).

If you’re staying in the sun for a long time, consider going without sunscreen for the first 10-30 minutes or so (depending on your sensitivity to sun), then apply it before you start burning.

Vitamin D gets stored in the body for a long time, weeks or months, so you may only need occasional sun to keep your blood levels adequate.

All that being said, not everyone (including myself) lives where there is sun year round. In these cases, getting vitamin D from foods or supplements becomes absolutely essential, especially during the winter months.

Bottom Line: Sunshine is the best way to get vitamin D, but sunscreen blocks its production. Many people don’t have access to sunshine for most of the year.

Here is the vitamin D3 content of a few select foods:

Although fatty fish like salmon, mackerel, swordfish, trout, tuna and sardines are decent sources, you would have to eat them almost every single day to get enough.

The only really good dietary source of vitamin D is fish liver oils, such as cod fish liver oil, containing up two to times the daily value in a single tablespoon.

Keep in mind that dairy products and cereals are often fortified with vitamin D (21).

Bottom Line: Cod fish liver oil is the single best source of vitamin D3. Fatty fish is also a good source, but you have to eat it very often to get enough.

Vitamin D deficiency is one of the most common nutrient deficiencies.

Elderly people are also at a much greater risk of being deficient (22).

People who have certain diseases are also very likely to be deficient. One study showed that 96% of heart attack patients were low on vitamin D (23)

Unfortunately, vitamin D deficiency is a silent epidemic. The symptoms are usually subtle, and may take years or decades to surface.

The most well known symptom of vitamin D deficiency is a disease of the bones called rickets, which is common in children in developing countries.

However, due to public health measures back in the day, they started fortifying some foods with vitamin D, which mostly eliminated rickets from Western societies (24).

Deficiency has also been linked to osteoporosis, reduced mineral density and increased risk of falls and fractures in the elderly (25).

Studies have also shown that people with low vitamin D levels have a much greater risk of heart disease, diabetes (both type 1 and type 2), cancer, dementia and autoimmune diseases like multiple sclerosis, to name a few (26).

Vitamin D deficiency has also been linked to a significantly increased risk of death from all causes (27).

Whether being vitamin D deficient actually contributes to these diseases, or whether people who have low vitamin D levels are just more likely to get them, is not as clear.

Bottom Line: Vitamin D deficiency is a well known cause of a bone disease called rickets in children. However, deficiency has also been linked to many other health problems, as well as reduced life expectancy.

Health Benefits of Getting Plenty of Vitamin D

Research on it has gotten lots of funding, and hundreds of studies have been done.

Here are some potential benefits of getting plenty of vitamin D:

This is actually just the tip of the iceberg.

Low vitamin D levels have been linked to all sorts of diseases, and supplementation has been shown to have numerous other benefits.

However, keep in mind that much of this is not definitely proven. According to a recent 2014 review, more evidence is needed to confirm many of these benefits (38).

How Much Should You Take?

The only way to know if you are deficient, and whether you need to take a supplement, is by having your blood levels measured.

Your doctor will measure the storage form, calcidiol or 25(OH)D. Anything under 12 ng/mL is considered deficient, and anything above 20 ng/mL is considered adequate. (Note: Some medical tests report results in nanograms (ng) per millilitre (mL). A nanogram is one-billionth of a gram. A gram is about 1/30 of an ounce. A millilitre measures fluid volume equal to 1/1000 litre).

Although the official cutoff point for vitamin D deficiency is 12 ng/mL, many health experts believe that people should aim for blood levels higher than 30 ng/mL for optimal health and disease prevention (40).

Additionally, many believe that the recommended intake is way too low, and that people need much more to reach optimal blood levels of the vitamin (41).

For people who are at risk of deficiency, this may be a good amount to aim for. Sometimes doctors recommend taking much more than that.

Just make sure to take vitamin D3, not D2. Vitamin D3 capsules are available in most supermarkets and health food stores.

Vitamins A, K2 and Magnesium Are Important as Well

It’s important to keep in mind that nutrients usually don’t work in isolation.

Many of them depend on one another, and increased intake of one nutrient may increase your need for another.

Some researchers claim that fat-soluble vitamins work together, and that it is crucial to optimize vitamin A and vitamin K2 intake at the same time as supplementing with vitamin D3 (43).

This is especially important for vitamin K2, another fat-soluble vitamin that most people don’t get enough of (45).

Magnesium intake may also be important for the function of vitamin D. Magnesium is an important mineral that is often lacking in the modern diet (46)

What Happens if You Take Too Much?

It is actually a myth that it is easy to overdose on vitamin D.

Vitamin D toxicity is very rare, and only happens if you take insane doses for long periods of time (48).

I (Kris Gunnars) personally live where there is very little sun year-round, so I take 4000-5000 IU per day of a vitamin D3 supplement.

I’ve been doing this for many years now, and consider it to be an essential component of my personal health strategy.

This health news is shared by Nutrition Breakthroughs, a publisher of nutrition articles and supplier of effective natural remedies since 2002. Nutrition Breakthroughs makes the original mineral-based sleep remedy Sleep Minerals II, containing calcium, magnesium, vitamin D and zinc.  It has been shown to be effective for sleeplessness and insomnia, as well as for heart health, restless leg syndrome, bone strength, menopause insomnia and teenage insomnia.

Doctor P. of Houston, Texas says: “I had developed sleeping problems and took two different sleep medications over the course of several weeks. When I discontinued them, the insomnia came back even worse. I literally got about 20 hours of sleep in 6 weeks time. Sleep Minerals II was just what I needed. I*ve been taking it for a couple weeks and getting many hours of sleep a night. As a doctor I would definitely avoid prescribing sleeping drugs.  I would recommend Sleep Minerals II.”